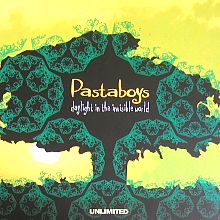 Pastaboys are three DJs from Bologna: Uovo, Rame and Dino Angioletti. Artistically born in the mid-nineties, they started producing for Irma Records under different guises, until they came up with the Pastaboys moniker for the release of their “Tortellini EP” on their own Instinctual label in 1995. The three partners are residents at the most popular Bologna House club Kinky, but constantly touring Italy and abroad. As House producers, they are influenced by sounds like disco, jazz, latin and afro. They have been remixing for labels such as Strictly Rhythm, NRK and MAW. Together with the Italian duo Bini & Martini they created the project Goodfellas. Pastaboys have been working on this debut album since 2002. The project involves names like:
– Osunlade, DJ/artist/producer spearhead of the spiritual/tribal House movement with his Yoruba label. Together with Pastaboys they form Atelewo, included in this album with the track “Chimes of Freedom”, released as a single on Unlimited in 2003.
– Shawn Cristopher, singer responsible for various House hits over the years. On the album she is featured in a re-recording of “On & On”, which originally appeared on “Tortellini EP”. – Wunmi, singer and dancer initially known for being Soul II Soul”s front woman on their legendary first album. Later became involved with Masters at Work and Bugz In The Attic, among many others. She wrote and sang three songs on the album: “Free Your Mind”, “Babalawo” and “Fallin”.